A few miles North East of Columbus in Blacklick, Ohio resides a treasure many have yet to discover: Steven Bush, a metal sculptor and owner of SmARTworks. Throughout his tenure as a master metal craftsman, he has installed pieces all over the globe – & he’s even created a colossal iron globe (Just ask him about it). Whether you’re trying to dazzle guests in your home or make a monumental statement to potential investors as they peruse your office and make silent judgements about your decor, the man has got you covered.

Get to know him & his work today.

Who says beauty can’t also be utilitarian? Steve specializes in custom-fitted iron railings, along with other structural-enhancing pieces, like fire pits, tables and chairs. The stuff he creates on his anvil is unlike anything you’ve ever seen. Why’s that? Because he never creates the same thing twice. The minute he completes a work of functional metal artwork, he breaks the mold. Boom. Done. One of a kind, never to be replicated or duplicated. You can proudly say that this piece is yours & ONLY yours. 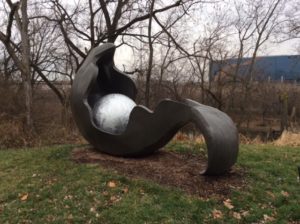 You know how so many artists get all worked up about people touching their work? Not Steve. He has personally invited families and folks to test drive some pieces. Push it. Kick it. Even whack it with a broom. These beauties are going nowhere. In fact, in all of his years of work, he has never (not once) had a piece break, fall apart or fall down. That’s because he 1) taps only the best local metal suppliers, 2) measures 5 times, cuts once, 3) cares deeply about his craft & 4) installs the dang thing himself! Weathering is no match for Steve Bush’s metalworks. Even after catastrophic instances, such as a house fire, his work still stands tall. That’s resilience. That’s forever.