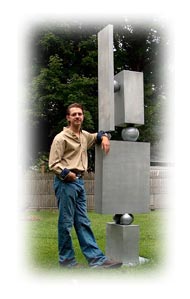 A few miles North East of Columbus in Blacklick, Ohio resides a treasure many have yet to discover. Steven Bush, a metal sculptor and owner of Smart Works has his studio a few feet from the home he owns with his lovely wife Theresa and two sons Sidney and Dominic. The five-acre location with a woods and lake is the perfect setting for an artist like Steve to practice his beliefs that the order of life must be – God, family, love of your work, money and time to play.

Meeting Steve is quite an experience as few people have his talent, ingenuity and values. He is a third generation iron worker with a strong work ethic. One of the skills he professes to be most proud of is that he learned to weld at about eight years of age to help his disabled grandfather repair farm equipment on his farm in Ashland, Ohio. He gained his independence and sense of responsibility early as well, while working at his uncle’s horse training facility in Oklahoma each summer starting at age fourteen. After graduating from a Parochial High School and feeling that art was his calling, he spent a year working in Oklahoma trying to decide exactly what he wanted to do with this passion. He obtained a scholarship to the Pennsylvania Institute of Art where he studied for two years while working part time as an apprentice in a jewelry factory. Wanting to return to Ohio, he worked to obtain scholarships for the last three years of his education at Columbus College of Art and Design. During this time he realized that sculpture was his passion and working with iron and other natural products were his future.

Steve continued his education and gained great experience while working at Fortin Iron Works in Columbus, Ohio. There he worked with men who really knew their craft and were willing to share their knowledge. He gained extensive experience making gates, fences and furniture and after a few years felt he was ready to go out on his own. That was ten years ago and Steve says he has never looked back.

He is proud of the fact that, while working on his own, he is able to produce one-of-a-kind pieces, which are designed custom for his clients. In the ten years since he started his business he has hand produced more than 3,000 unique pieces. His work is displayed in 24 different states and 4 countries at the present time and he hopes to expand even further. All of this has been  accomplished through word-of-mouth as he has little time for marketing. 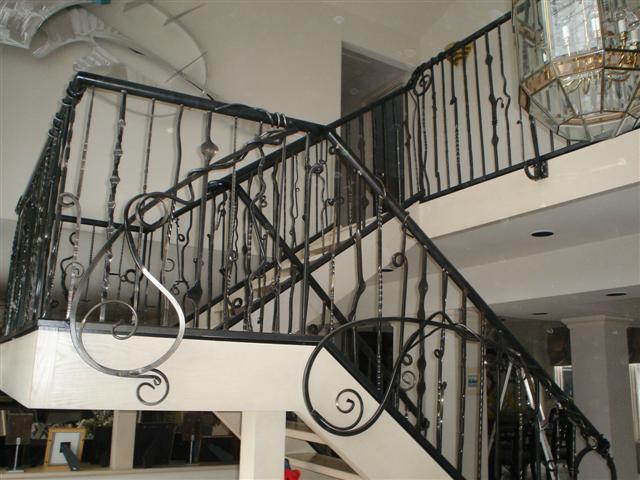 He has performed custom work for The Ohio State University, Cleveland Clinic, San Remo Winery in Napa Valley, New Albany Surgical Hospital, Scotts Co., Cowboy Hall of Fame in Oklahoma, Elementary and High Schools, a playground for a school for the disabled, several churches, offices, commercial and public properties as well as many residential projects. He has created works as small as pieces of jewelry and as large as gates wide enough for two cars to pass through at the same time. He always focuses on one client and one piece at a time and stresses his honesty and timeliness in completing his projects. He never duplicates a piece as he feels it would devalue the original piece and he never copies someone else’s work.

Steve says he has been fortunate to work with some of the most talented blacksmiths in the area and has learned a great deal from them. Because he recognizes the value of experience and formal education, Steve began teaching part time at Columbus College of Art and Design five years ago. He teaches some weekend welding and fabrication classes, but is most pleased to have the opportunity to lecture the Fine Arts’ students on how to make a living creating art. This class has been well-received and needed. Steve has also been willing to allow students to apprentice with him, not only about creating art, but also about the value of hard work and treating people with honesty and respect. He feels grateful that he can support his family using his God-given talents and after all this time still love his work.

If you have never heard of Steve Bush or smARTworks, it’s because he has been so busy working he hasn’t had time for much advertising. He has, however, been featured in CityScene Magazine, on TV and Radio. He has also been rated by Angie’s List with its highest rating. He has appeared at galleries and art festivals and especially Home and Garden Shows. Schools and Senior groups have taken trips to his studio to watch him work as Steve is always willing to share his expertise with others. Steve does all of his own work, so you can expect to talk directly with him about any project you are considering.

Get In Touch With Steve Today!

If you are thinking about custom metal work, such as gates, furniture or one-of-a-kind sculpture works, remember Steve Bush of smARTworks! Send in an information request here or call him at (614) 578-4084. Steve will answer your calls personally and work with you directly to meet your needs.